1182
Francis is born in Assisi. Happy childhood, he enrolls in the army, and becomes a prisoner...
1204
A meeting which is a step in his conversion: the kissing of the leper 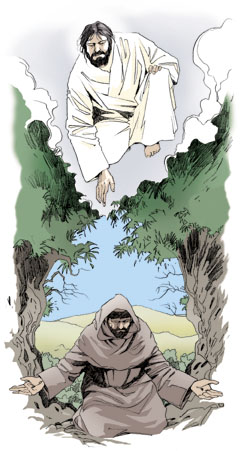 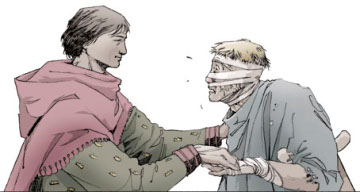 1205
Francis becomes a mason, he restores three churches...
Touched by Grace, he seeks the meaning of his life.
1209
Pilgrimage to Rome. The Pope approves his way of life (birth of the Friars Minor Order)
1212
Clare of Assisi, seduced by Francis' way of life, settles down with a few companions in San Damiano (birth of the Poor Clares Order)
1221
Men, women, households are also attracted to the spirit of the Gospel lived in the manner of Francis (birth of the Secular Franciscan Order)
1215
Francis attends the Fourth Lateran Council. Later, during the crusade, he meets the Sultan.
1224
Marked by the Passion, Francis receives the stigmata.
1225
Francis composes 'The Canticle of Creatures'.
1226
On October 3rd, Francis dies, surrounded by his brothers.

Made by www.pbdi.fr Illustration by Laurent Bidot Translation : Cindy Garitan